The Wabbit speeds along on the Metro 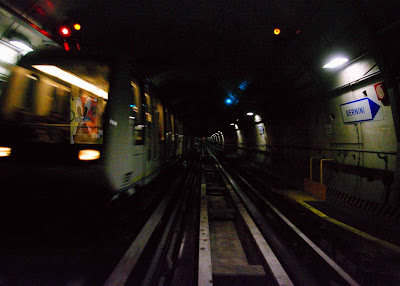 The Wabbit liked to be at the front. He knew that without doubt he was a bit of a speed freak - and even if the sign said the front seat was for children, it said nothing about wabbits. Stations came and stations went but the tunnel itself was special. After all, the Wabbit thought, tunnels were built for wabbits. It occurred to the Wabbit that it would be real cool if he could race through the tunnel at top speed on his own. Sometimes the Wabbit thought in a rather hippy manner that he could not quite discard, no matter how hard he tried. In any case, the Wabbit was headed for the end of the line and at that stage he was to go a special place for further instructions. Lapinette had been mysterious about her plan but the Wabbit knew it was something to do with transport. It always was. So the Wabbit relaxed. Usually if he followed his nose, there would be a good outcome. Therefore he would be laid back. The Wabbit heard himself thinking these thoughts and he knew in his heart that he wouldn't even like being "laid back". So he pulled his legs up under him and laid back and smiled. The train whooshed along and before the Wabbit had become comfortable, it pulled into the terminus and announced that it had. "Everything speaks these days," murmured the Wabbit.
at March 21, 2011