The Wabbit leaves in a Lightning Storm 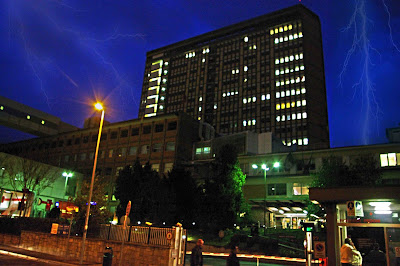 The Wabbit spent all day in the hospital ward talking with Lapinette and he planned to leave at nightfall. Lapinette had a plan and the Wabbit was integral. But no sooner had the Wabbit hopped out the entrance to the big hospital than a wind sprang up. It was a strange, mild wind that ruffled his fur and bent back his ears and was vaguely disturbing. Then there was mighty flash and a loud boom. Heavy rain poured down in torrents and made rivers out of the gutters. "Oh no," thought the Wabbit and his hop quickly changed to a lope, then a sprint. The Wabbit zigzagged amongst the puddles as the rain crashed down relentlessly. Lightning flashes made crazy shadows out of his ears and projected them onto the sides of tall buildings. He streaked down thoroughfares and across market places while shop windows shook and car alarms shrieked. The Wabbit ran so fast that his paws left a dry strip on the road. But the Wabbit knew where he was going and there it was - the unmistakable "M" sign of the Metro. He disappeared down a set of stairs and all of a sudden he was in a brightly-lit and very dry space. "Phew," thought the Wabbit. "Where's my emergency coin?"
at March 19, 2011