The Wabbit in Transit 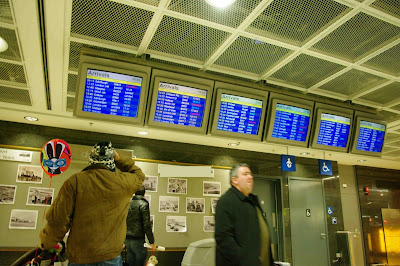 The Wabbit had disembarked from the plane feeling rather floaty. The aircraft had flown round and round in circles, whilst the Wabbit was plied with salad sandwiches and copious quantities of carrot juice. He had been surprised when he found he was the only passenger on the plane but he had used the opportunity to hop up and down the aisle and look in all corners. Then he looked at all the literature behind the nets on the back of the seats. When the novelty wore off he snoozed and slumbered until eventually the plane landed with a bump and came to a standstill. At his temporary destination, the arrivals board indicated that the Wabbit had been delayed. Yet the Wabbit knew there had been no delay whatsoever. In any case, no-one was likely to meet him, because he had been told to go immediately without hesitation to the Transfer Lounge and await instructions. He hoped there would be no more hospitality there and when he hoped that hope, his Wabbit stomach began to revolve, then churn. The Wabbit could only take so much uncertainty. He made his way to the Transfer Lounge with a grumbling, noisy tummy and as the Wabbit hopped, his fellow passengers turned around to locate the source of the weird sounds.
at March 12, 2011