Lovely Lapinette thinks about The Wabbit 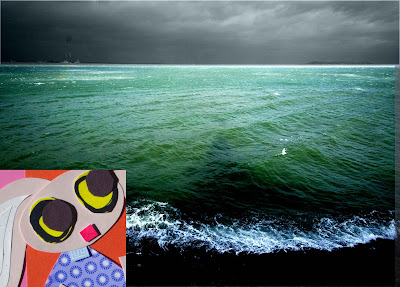 The Lovely Lapinette had fallen to wondering about her beloved, the Wabbit. He was probably far away but then again, this mightn't be so. Their missions and adventures meant they were often apart. But sometimes they had been only a few hops distance from each other and had not known. "Oh I hope he's not getting into any particular trouble," thought Lapinette. A voice in her head advised her that in all likelihood the Wabbit was talking philosophy to someone on a bus. Lapinette agreed with the voice. That would be the Wabbit. But she knew he could get into scrapes. Once she had been forced to rescue him from a left luggage locker at the railway station. He had locked himself up in a well meaning, complex but ultimately doomed plan to catch a notable burglar. Lapinette remembered the look on his face when she levered open the door and he hopped out. She couldn't help giggling. Then sometimes the Wabbit would say, "Hang on a minute, I've got a great idea!" Lapinette knew that often it was great but she was cute enough to realise when it wasn't. Lapinette sighed. She wondered if she should contact him again on his communication device but decided against. The Wabbit would be in touch in due course.
at March 06, 2011