17. The Wabbit and the Big Broadside. 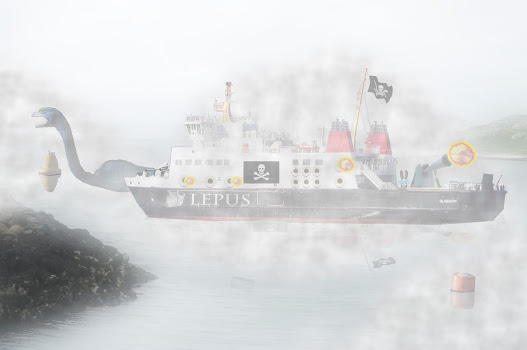 The Wabbit looked over the rail. Wablantis was shrouded in a mist that hung over the sea like wet washing. The Wabbit signalled to the bridge. "Bring her round Jenny and steady as she goes."  The Lepus swung. So did the cannon. "Lock," said the Wabbit. "On my mark. Fire!" He lifted a paw. The coast shook.  "Again," said the Wabbit. The frackers' installation crumbled. "One more," breathed the Wabbit. The Lepus spat fire. The Wabbit watched a dull flame bathe the buildings as they collapsed to rubble. Now the installation was a flat one. The sea heaved. A plesiosaur broke through the waves and grew larger until its head and neck towered above the deck. Nessie boomed in a mighty voice. "Ye'll be needin' a pilot." Then he turned and headed slowly out to sea. The Wabbit signalled the bridge. "Follow that monster." The radio crackled with telegraph signals. "Slow ahead." The bow of the Lepus ploughed quietly through the mist, taking Nessie's route though the reefs. Suddenly they were beyond the mist and in open sea. "This way" boomed Nessie. The Wabbit's ears made a hollow noise. He could vaguely hear the cannon although gunfire had long stopped - and he felt a little dizzy. His radio crackled. "The bar is open," said Jenny. "I thought it never closed," cheered the Wabbit.
at March 01, 2017