5. The Wabbit and the Black Planet 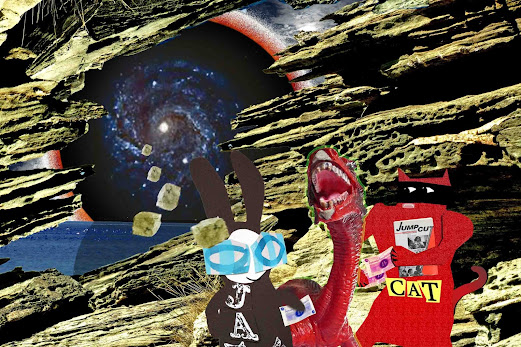 The vehicles vanished and the sky grew dark. The Wabbit and Skratch found themselves pulled into a jagged cave. "I brought you to shelter," said a dinosaur. "Most kind," replied the Wabbit. He fished in his fur and brought out a meal voucher. "Here's a small token of my esteem." Skratch nudged the dinosaur. "I will triple the Wabbit's generous offer, out the goodness of my own heart." He waved three vouchers. The dinosaur threw back his head and roared suspiciously. "Who takes these?" Skratch meowed seductively. "Any participating restaurant in the Sombrero Galaxy." The dinosaur took the Wabbit's voucher and tucked it under his scales. Then he took Skratch's vouchers and did the same. A strong breeze tried to pull them off their paws. The dinosaur grabbed them both and sank his mighty claws into the rocks. "Hang on." The breeze turned into a wind that quickly became a gale. Things grew darker. Rocks flew past their heads. The Wabbit held tight, but he risked a glance back. The Black Planet hung on the horizon, sucking up everything that wasn't nailed down. "It'll go in a minute," roared the dinosaur. "Where to?" yelled the Wabbit. The dinosaur dug his claws deeper into the rock. "No one cares, as long as it's not here." Skratch reached across to grasp the Wabbit's fur. The wind pulled at his eyeballs. He scrunched his face into his mask and let out a muffled yell. "That's no planet ..."
at March 20, 2017