7. The Wabbit and the Short Jenny 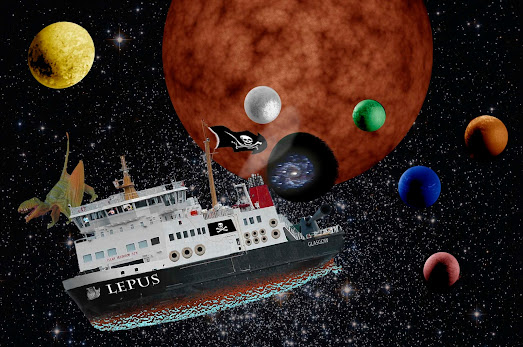 The Wabbit and Skratch evacuated the dinosaurs and crammed them into the cargo bay. All except for one, whose name was Terry. He seemed more than happy to wing through space and pronounced it entertaining. Engines were at full capacity and for a while the Lepus made headway. But the force of the singularity tore at the flag and threatened to rip it from the mast. Jenny spoke to the engine room. "Can you give me more power, Skratch?" "Aye Captain," said Skratch, "but she'll no take it much longer." With a shudder the Lepus darted forward. "Shiver me rivets," said Jenny. She clung onto the wheel. "What next, Commander?" The Wabbit glanced from the bridge. "Hide behind the yellow planet, Try to snooker it." Terry seemed to know. He swung and with a deft movement winged to the far side of the yellow planet. The Lepus followed. The singularity carried straight on, bounced from an invisible force field and reappeared on the far side of the system. "Lost him," sighed the Wabbit. "Not for long," said Jenny. The Wabbit struck the bulkhead with a clenched paw. "Release the space plankton." A hazy cloud pumped from the funnels. The singularity seemed to inhale the vapour. Then it stopped dead and lay motionless. "Stop shot," quipped the Wabbit. Jenny swayed back and forward. "Now the white planet is closing on the black ..."
[Short Jenny. In billiards, this constitutes an in-off shot into a middle pocket.]