3. The Wabbit and the Snooker Planets 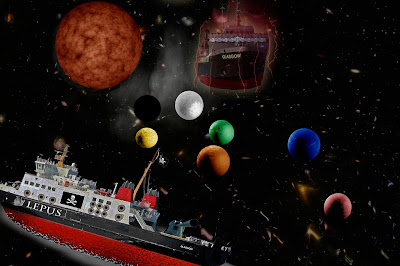 Captain Jenny signalled the engine room and the Lepus stood still. The Wabbit felt the faint hum of auxiliary engines to be reassuring - although his heart was pounding. "There they are," he murmured; "Just where the map said." The Lepus swung in a distant orbit round an angry sun. Lapinette touched his shoulder. "They remind me of something." "Pool," said Jenny. The Wabbit shook his head. "Snooker." Jenny and Lapinette had a confab. "What colour has the most points?" "Black, seven" shrugged the Wabbit; "Black, pink, blue, brown, green, yellow, red." "How would you play this one?" asked Lapinette. "We need a break off," answered the Wabbit; "to get everything rolling." Jenny whirled the ship's wheel, which was only for effect. "Send out your Cailleach to stir them up, Commander." The Wabbit wasted no time and a giant Cailleach appeared close to the planets. A loud complaint issued immediately from the engine room. "Ye canna have holographics for long, Commander. It's braw but it's hard on fuel." "Look. Something happened," said Lapinette, She pointed to the Green Planet. "Magnify on screen!" shouted the Wabbit. The Green Planet repeatedly became bigger, then smaller. It seemed like it was breathing. "Looks like our kind of planet," said Lapinette; "but how much is it worth?" "Three," sighed the Wabbit.
[Background: NASA/JPL-Caltech  under Creative Commons Licence]
at March 13, 2017