4. The Wabbit and The Green Planet 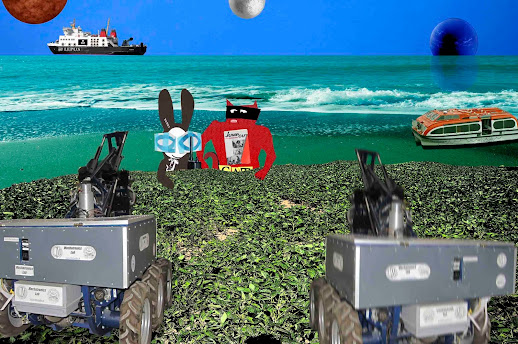 It was a stiff climb and the Wabbit and Skratch were both puffed. The Green Planet was covered in shrublings that looked like a crop of some kind. "These look yummy," said Skratch; "Do you think they're safe to nibble?" But the Wabbit's ears stood straight upright, "I hear rumbling." "I thought that was your stomach," replied Skratch. Two exploration vehicles rumbled to the edge of the cliff. "Welcome," spoke a vehicle; "May we show you to the Interpretive Centre?" Skratch grinned, because the Wabbit's aversion to such centres was well known. "Anywhere around here you can get a bite to eat?" he purred. The Wabbit proffered a polite paw. The vehicle extended a sensor. "We don't get many visitors." The Wabbit nodded and asked, "When were the last?" "You're the first," said the vehicles and they chattered to each other in a noisy series of bleeps. "We were left here by a mission from SWEEPS-11. We've seen no-one since." Skratch and the Wabbit conferred. "What is your task?" said the Wabbit. "Flora and fauna protection," replied the vehicles. The Wabbit's smile was a question. "From what?" The two vehicles threw many shapes. "When the Black Planet orbits, we hide everything or the planet sucks them up." The Wabbit spoke urgently into his radio. "Lepus, can you detect the black planet?" The radio crackled with Jenny's voice. "The black planet broke orbit. It's moving our way."
at March 15, 2017