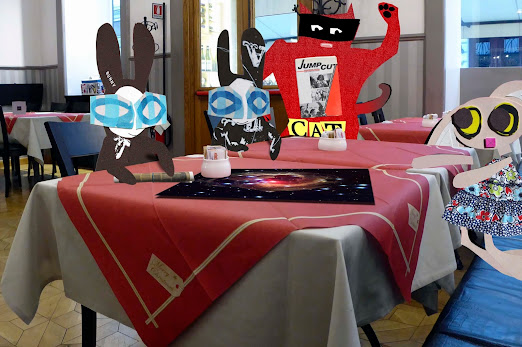 The Wabbit unfolded a colourful chart. "I made a rough copy of the star map." Silence fell in the Adventure Caffè. "I coloured it in," explained the Wabbit; "It's all the rage." Lapinette pointed to the chart. "What's that red area?" "That is our target area," replied the Wabbit. "The new planets are there - all M Class but their sun is well dodgy." Skratch the Cat gestured impatiently. "Look, if we don't understand our last adventure, we'll have no clue about the next." Wabsworth rapped the table. "All right, I'll explain. Our journey took on the attributes of a road movie." Skratch purred quietly. "But the road movie is an arrested gaze and should not be taken literally." Lapinette chimed in. "Yes, our Wablantis journey was an accretion of elements that never implied continuity." Wabsworth smiled an infuriating smile that he'd learned from Skratch. "So meaning emerges as narrative construction fades into forgottenness." "That's Heidegger," observed Lapinette. The Wabbit suddenly tapped the chart and spoke strictly. "Phenomenology won't get us to these planets, but I know what will." He paused for effect. "The Lepus will scoop up fuel particles from space, just like a whale in the sea." Lapinette shook her head. "We won't have enough thrust." The Wabbit disagreed. "I invented a quantum turbo." "What does it feel like?" asked Lapinette. "Like being inside a barrel, rolling down a hill," grinned the Wabbit.
at March 07, 2017