9. The Wabbit and the Planet Mashup 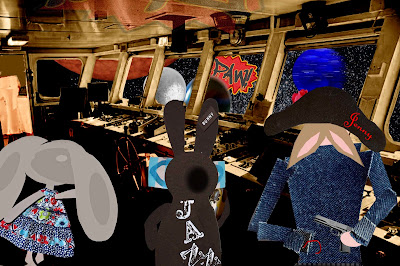 "Shields up!" said the Wabbit. His radio crackled with Skratch's voice. "The shields are far from ready, Commander." Jenny rocked back and rolled slightly. "Raise them anyway." The Lepus vibrated. "Please let them work," breathed Lapinette. The white planet smashed into the black planet. A flash lit the sky. Every rivet in the Lepus shook. Then nothing. The white planet lay nudged against the black. "Wait," said Jenny. The black planet separated and swam into a low orbit. Then it headed straight for the Lepus. "Full astern," yelled Jenny. Skratch's voice rang out from the speakers. "She'll no move!" "Down shields!" shouted the Wabbit. The shields dropped and a triple blast hit the Lepus. Lapinette covered her ears with her paws and hung on. The Lepus curved behind the blue planet and stopped. All was still until the radio burst into life. "We only have auxiliary." said Skratch. The Lepus lurched and started to move. "It's no me," crackled Skratch. Lapinette gazed into space and made rough mental measurements. "It's the blue planet," she said; "It's moving." "We're being pulled, hang on," said Skratch. Mechanical clanking issued from the engine room. The Lepus shuddered to a halt. "How d'ya do it?" smiled the Wabbit. "I have a quantum anchor," purred Skratch. "Don't tell anyone," said Jenny.
at March 29, 2017