18. The Wabbit and the Arrival Home 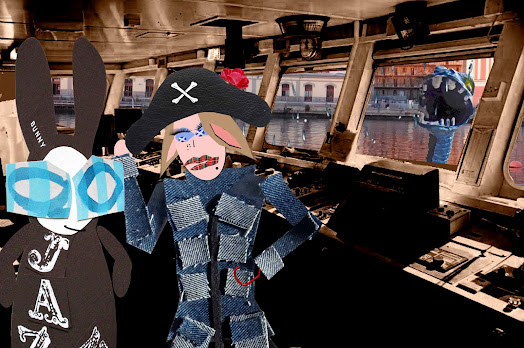 The Lepus sailed into Trieste harbour on a calm evening. To the Wabbit it felt like they'd never left but Nessie broke suddenly through the mirror surface of calm water. "Debriefing at 19.00 hours," said the Wabbit. "Aye aye," said Nessie. "I'll just swim awa' doon to the Grand Canal." "Please be discrete," murmured the Wabbit.  Nessie vanished with a giant splash and a monster laugh. "Commander?" said Jenny. The Wabbit nodded. "What about the spy?" continued Jenny. The Wabbit smiled broadly. "He's still with us." Jenny looked unhappy and growled. "We'll make him dance the hempen jig!" The Wabbit shook his head. "Let's keep him where we can see him." They both paused and watched the water slip by.  "And the new map?" said Jenny. "It's a star chart," said the Wabbit. "Then you won't be needing me." said Jenny sadly. The Wabbit put his paws behind his back and swayed a little like Jenny. "The Lepus engines get a retro fit. You'll be the first pirate ferry to sail space." Jenny's face lit up. "I suppose the sailing principles are the same." Now the Wabbit's face beamed. "I had an idea for tachyon propulsion and it seems just the job." "Have you tried it?" asked Jenny. "Yes," said the Wabbit, "I used a rubber duck in the bath"  "And it works?" asked Jenny. "The bath disappeared," said the Wabbit.
at March 03, 2017