2. The Wabbit and the Ship Trials 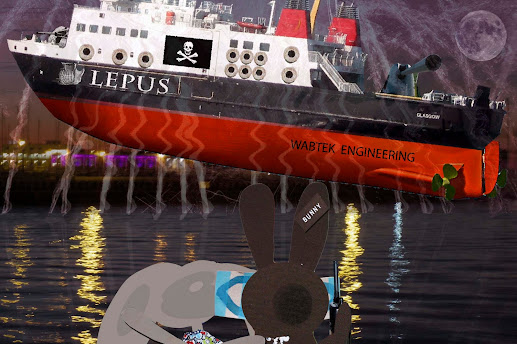 Lapinette waited with baited breath. The Wabbit was nonchalant and lifted his walkie talkie to his ear. The radio crackled with Captain Jenny's voice. "Stage one complete. All systems optimal." The Lepus hung over the moonlit bay, throwing waves of energy to the surface. Jenny's voice sounded cheerful. "Compliments, Commander." The Wabbit grinned. Light from his 28 teeth flashed choppy reflections across the harbour. He spoke into the radio. "Up works. Now try down." The Lepus sank until her hull grazed the water. "Up again and try port and starboard thrusts." The Lepus pirouetted like a Mariinsky ballerina in Swan Lake. "Ooooh," murmured Lapinette; "your work is done!"  "Not quite," smiled the Wabbit. His mouth pressed aginst the radio. "Now loop the loop." The radio crackled with pirate expletives. "It's the red button at the base of the helm," said the Wabbit. "Aye Commander," said Jenny. The Lepus vanished. Lapinette counted the seconds and crossed her paws. Lightning flashed. The Lepus appeared upside down in the far sky and just as quickly vanished. Lapinette counted again. With hardly a splash, the Lepus settled in the harbour. Lapinette's sigh of relief lasted for ever. The Wabbit lifted his radio. "Jenny, report." Jenny's voice was a croak. "OK Commander, just a bit of upchuck." "We'll live," said the Wabbit.
[Upchuck: Vomit (US slang )]
[Photo credit: Background scene - Camilla Galli da Bino]
at March 10, 2017