1. The Wabbit and the 7 Planet Trip 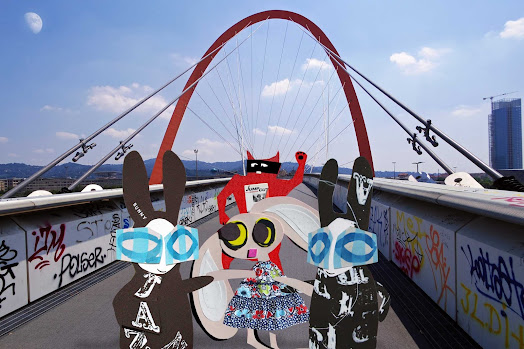 It was quiet on the Big Bridge. At half a kilometre long and seventy metres high, the bridge was perfect. No-one could hear them talk about the next mission. Far below, a high speed train broke the silence as it squeaked across junctions and into Porta Nuova station. Lapinette danced a little jig to the rhythm. "Sail me to the stars," she sang. "Far past Jupiter and Mars," sang the Wabbit. "In other words, hold my paw," sang Wabsworth. "In other words, baby kiss me," warbled Lapinette. They all laughed, until a distant cry wailed along the footpath. "Me first," shouted Skratch the Cat. The Wabbit grinned ear to ear. "Now that we're here, it's time to plan the ... ." A goods train rumbled by and drowned him out. "The new planets are forty light years away," said Lapinette; "So I'll bring my fur drier and stuff." The Wabbit made a mental note regarding cargo space. "Let's give these seven planets names," said Skratch with a wag of his tail. "Maybe after we've been there?" suggested Wabsworth. "Oh that's no fun," said Lapinette. "Go on Wabsworth. You start!" Wabsworth smiled because had already thought of names. "Maia and Eleckra," he said; "Asterië, Merope, Taygeta, Halcyone and Celæno." "They're taken," said Lapinette. "Anyway, I thought one could be Lapinette." "You're more of a star than a planet," winked the Wabbit.
at March 09, 2017