8. The Wabbit & the Dinosaur Dispute 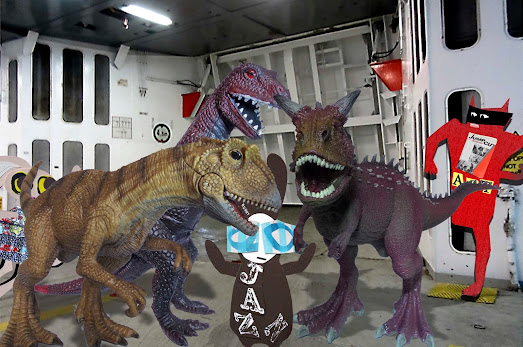 Uproar brought the Wabbit to the cargo bay, swiftly followed by Lapinette and Skratch the Cat. Together they tried to smooth ruffled scales. The Wabbit was a bit hazy about dinosaurs so he gave his reluctant passengers names. "What's it all about Rexy?" "We want to go home," said Rexy. "Ships give us nausea," said Rap. Lapinette became sympathetic because she had no sea legs either. "It's OK in space, there's no up and down." Liz bellowed. "We don't like side to side." "Or forward and back," added Rap. The Wabbit had not the slightest notion how to deal with this. "What would you prefer?" he asked. "We like to roam!" roared the dinosaurs. Skratch shouted from the bulkhead door. "We've no got much roaming room." The Wabbit wore a thoughtful look that bode a variety of things, few of them practical. "When it's all over, we'll find you a new planet!" Lapinette winced. The dinosaurs mumbled among themselves. "Will it have a volcano?" asked Rex. "Yes," said the Wabbit quickly; "Gently warming the land around." "And lush pastures for grazing," said Rap. "Of course!" smiled the Wabbit. "And proper toilets," said Liz. "I'm fed up pooing in spiky grass." The Wabbit's smile lurched to the side and his paws flailed.  "I'll see what I can do. But I'm needed on the bridge. Any more questions will be answered by Lapinette." The Wabbit darted past Skratch and down to the bowels of the ship.
at March 28, 2017