10.The Wabbit and the Critical Mass 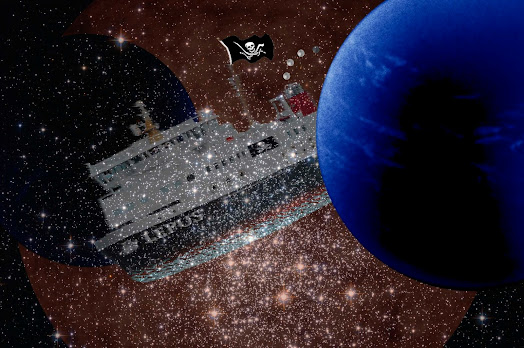 The Lepus engines fired up with a judder. She sliced into the blue planet's orbit then out again. But instead of gaining velocity, she slowed dramatically. Space between blue and black planets was dense and silvery. It was like sailing through starry mud. Skratch's voice barked over the speakers. "Every vent is clogged, Commander. The engines are suffocating." The Wabbit switched on the Stealthicator and the Lepus half disappeared. The pirate flag did not and it seemed to wave a warning. The Wabbit shrugged and reversed the Stealthicator. The Lepus reappeared. All its lights came on. The foghorn blasted again and again. "Vents are clear," Commander," said Skratch. The starry mud seemed to drain away. Captain Jenny scrutinised the blue planet. The Wabbit took bearings and checked instruments. He shook his head. "Shouldn't the planet rotate?" Lapinette shook her head too. "It must be tidally locked." "I see no tide," said Jenny. "It's just an expression," replied Lapinette; "Think of it as gravity." The Wabbit smiled. "If it's locked, it might be a Twilight Planet with a habitable zone." They had a swift conference. "We'll send down the bio pods," said the Wabbit. "You know what happened last time," sighed Lapinette. "This time I took precautions," said the Wabbit. Lapinette raised an eyebrow. "I gave them a good talking to," said the Wabbit.
at March 31, 2017