6. The Wabbit and the Big Pull 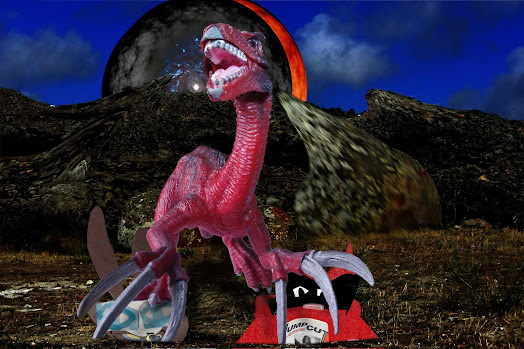 "Yikes!" yelled the Wabbit. Skratch the Cat hissed long and hard. There was no more shelter, but the red dinosaur gripped them in a vice of iron as he bellowed at the sky. The Wabbit hung on to whatever he could. A rear foot pinned him to the ground, trampling his fur. He could barely breathe. Rocks warped and left the ground as the pull became irresistible. "It's a singularity," gasped the Wabbit. "Someone made this. Trust me," screeched Skratch. The singularity moved between the sun and the Green Planet. Suddenly it appeared to be aflame. "It's going away" roared the dinosaur. "It always does this." The Wabbit felt the pull diminish. He pulled his ear back into shape. Skratch tugged down his fur and adjusted his mask. "How long before the next time?" asked the Wabbit. He picked himself up and patted the red dinosaur with both paws. Skratch crept from below the giant claws and arched his back. Then he yawned. "The air seems peculiar." The dinosaur bellowed sadly. "We lose some atmosphere each time." The Wabbit froze. From deep in his unconscious came a moment of clarity.  "It's a harvester." His radio dropped from his fur and it crackled with Jenny's voice. "Commander?"  The Wabbit smiled into the radio. "Tip top." "I had to move the Lepus away." said Jenny. "Good idea. Otherwise you'd be compost," said the Wabbit.
at March 21, 2017