The Wabbit's After Adventure Caffè 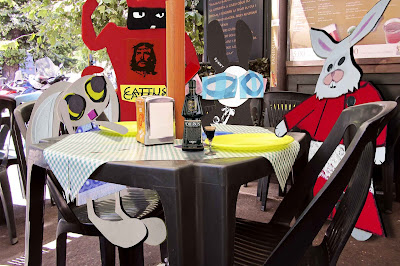 The Wabbit and Lovely Lapinette were enjoying a quiet break when both Skratch the Cat and the former Cardinal Lapin arrived at the same time. "Sua Santità," said Skratch. "I offer you congratulations on your recent appointment." "Ah, Skratch," said Lapin, "I've heard all about you. Now tell me. What kind of adventure was that?" Skratch was jubilant and addressed the Wabbit. "It was a tour de force." The Wabbit raised a questioning eye. Skratch winked at Lapinette. "But deeply flawed!" he added. Now the Wabbit beamed with an astonishing beam. "Best thing you ever said! Refreshments all round!" He turned to Lapin. "So what will you have?" "I usually have a small amaro dei frati," smiled Lapin. "Diesus," called the Wabbit and everyone smiled. Then the Wabbit became serious. "My good friend Lapin, will you exercise a preferential option for the excluded?" "And obtain justice for the animals," said Lapinette." "And help the marginalised and defenceless." said Skratch. Lapin smiled. "It looks like I'd better start now. Anything else for the first week?"
[Diesus: a digestive amaro liqueur made by an order of monks (Amaro dei Frati)]
at May 17, 2013