5.The Wabbit & the Jailhouse Shadows 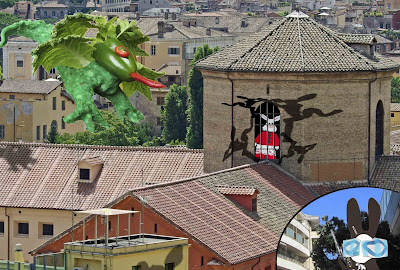 The Wabbit had just left Tony's place when his radio crackled. He shielded it from the noise of the traffic and hissed, "Commander Wabbit!" The Wabbit heard a fluttering of dragon wings and a peppery voice spoke. "It's Terni the Dragon, I found Cardinal Lapin." "Where is he Terni?" said the Wabbit calmly. The Wabbit could almost feel Terni's hot breath. "He's in an Old Abandoned Prison." "Are you sure it's him? said the Wabbit. "Red clerical garb, white lace trim, sideways pointy ears," said Terni. "That's Cardinal Lapin all right," said the Wabbit. "Shall I swoop, pluck and extract?" asked Terni. The Wabbit thought for a bit and decided against swooping and plucking. "Terni, can you see shadows in the wrong place?" "I can indeed," said Terni. "They're all around his cell." "Then stay clear for the moment," said the Wabbit. "We'll break him out some other way." Terni looked down and saw that Cardinal Lapin had noticed him. But Terni hadn't always enjoyed the best of relations with Church figures, so he waggled his wings like a small plane and shot into the sky. The Wabbit thought for a minute - and then a song came into his head. He hummed it to himself and shuffled his feet and snapped his paws in a most peculiar way. "Everyone in the whole cell block, is gonna dance to the jailhouse rock!"
at May 07, 2013