4. The Wabbit in the Sandwich Lab 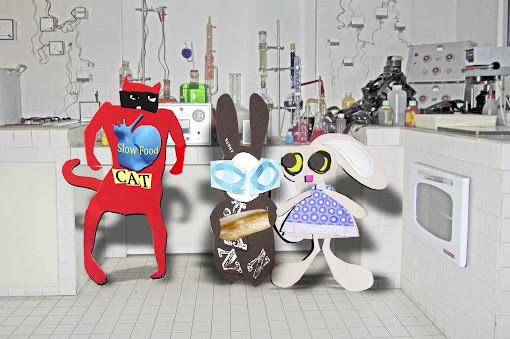 The Wabbit worked frantically and wouldn't calm down. "Just be still and tell us what happened," said Lapinette. "They took my sandwich!" gasped the Wabbit and that was all he would say. "Who?" asked Lapinette. The Wabbit gurgled. "I didn't quite catch who it was, Wabbit," said Skratch the Cat. "The Gnamskulls!" said the Wabbit finally. Lapinette shook her head. "I'm sorry Wabbit, that was my fault. It was just a training exercise, there are no Gnamskulls." "Yes, there are, there are!" ranted the Wabbit. "They attacked me at the market and hoovered my sandwich." "The one you had lying in your fur?" said Lapinette with her paws on her hips. The Wabbit nodded. "Wabbit, it was ancient!" sighed Lapinette. "It's the principle of the thing," said the Wabbit. Skratch the Cat nodded gravely. "I agree with the Wabbit. We can't less this pass." "¡No pasarán!" yelled the Wabbit. "No pasarán for Gnamskulls." Skratch joined in. "If we let them abuse our sandwiches, our fur will be next!" Lapinette looked at them both. "Does either one of you have a plan?" she asked. Skratch started to purr loudly. "I do have a plan," he said. "Does it involve gnamming? asked the Wabbit. Skratch nodded and winked at Lapinette. "Now I'm hungry," said the Wabbit.
at May 27, 2013