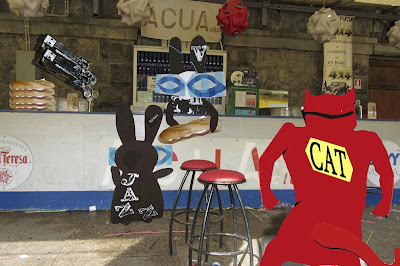 Hidden in a bar on the river was the Wabbit's secret armoury. There, Wabsworth - the Wabbit's android double - both gathered information and dispensed weaponry to certain agents from the Department of Wabbit Affairs. "We need more sandwiches with the secret filling," said the Wabbit. "I only just gave you some," said Wabsworth. The Wabbit hopped up and down impatiently. "It was a destructive test," he sighed, "there's none left." "Then I shall expect a signed chit stating the exact circumstances of usage," smirked Wabsworth. "Later!" hissed the Wabbit. Wabsworth leaned back and pulled himself up to his full height. "This is a controlled substance from an old adventure," he explained. "I can't keep supplying it. It's dangerous." "That's why we need it." said Skratch. Wabsworth gave him a stare. "What happened anyway?" he asked. "Gnamskulls consumed it with gusto," said Skratch, "and so we need double-strength filling ingredients." Wabsworth took a number of sandwiches from the bar. "Here are some I made earlier," he said. "And do not, I repeat not let them escape into our environment." The Wabbit seized the sandwiches and carefully examined the filling. "They look just the same," he said. "Never mistake appearance for reality," smiled Wabsworth.
at May 30, 2013