8. The Wabbit and the Catering Corp 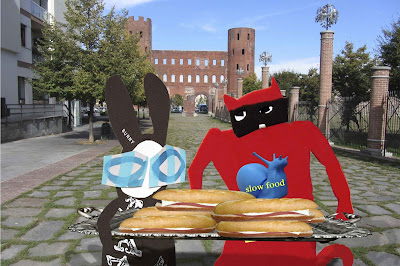 The Wabbit and Skratch the Cat headed out to snare the Gnamskulls, carrying the sandwiches with the dangerous special filling. The Wabbit nudged Skratch gently. "We're working undercover Skratch, so whatever you do don't talk about food." "Oh!" said Skratch. Now all Skratch could think of was food - so he tried to change his thoughts. "Wabbit, he said nonchalantly. "Is it OK to talk about films?" "Excellent!" said the Wabbit, "please proceed." Skratch thought for a while then his eyes lit up. "Have you seen that film, Breakfast at Tiffany's?" "Skratch, you'll give the game away," hissed the Wabbit. "We're just caterers. They never talk about food." "What do they talk about? said Skratch. "Topical things," said the Wabbit. "OK," said Skratch and thought again. "I know," he said finally. "Did you know yoghurt does weird things to your brain?" The Wabbit scowled and tried to think. "We'll have a quiz. What's Turin famous for?" Skratch was quick as a flash. "Chocolate and coffee," he yelled. The Wabbit sighed. "It's cars, Turin is famous for cars." "Then I've got a question," said Skratch. "What's a new car colour?" The Wabbit shrugged and gave up. "Crème brûlée?" he grinned.
at May 31, 2013