6. The Wabbit goes too Far 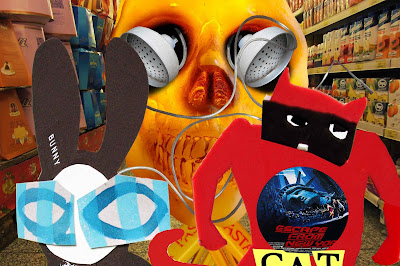 "It worked" shouted Skratch. The Gnamskulls chased and devoured every scrap of sandwich filling, then demolished the suitably stale bread. But now they were hooked. They wanted more of the special sandwich filling and crashed around the supermarket in pursuit. "Back to the laboratory!" said the Wabbit. But he was a little late. The Gnamskull leader sniffed the air and detected the smell of sandwich filling on the Wabbit's paws. With a ghastly slavering noise issuing from his scavenging tubes, he headed straight for the Wabbit and Skratch. "Let's make ourselves scarce," yelled Skratch and took off. "In total short supply," replied the Wabbit, loping towards the exit. But the Gnamskull was faster than they had first imagined - and he bore down on them quickly. They could smell the stale breath from his teeth and started to sprint. "This calls for emergency action," thought the Wabbit, so he felt under his fur. As he rummaged and rummaged for any old piece of forgotten sandwich, an ancient hard crust dropped to the ground. And in the few seconds that the Gnamskull stopped, the Wabbit and Skratch were gone. Outside the supermarket, they slowed to a saunter. "A successful venture," said the Wabbit. "And no-one needs to know more," smiled Skratch.
at May 29, 2013