6. The Wabbit & the Prison Inspection 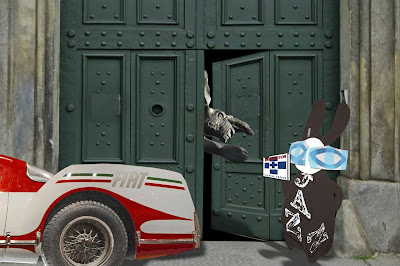 The Wabbit made a lot of noise as he parked Turbina at the prison gates. Then he jumped out and kicked the door. There was silence for a long time so he kicked it again. A bolt drew back and the door swung inwards and a head popped out. "Go away," said the figure. The Wabbit drew an official looking card from his fur and thrust it in the figure's face. "Blue Cross!" he yelled. "Surprise prison inspection under the Geneva Convention!" The figure withdrew and the Wabbit heard murmuring. "It's the Blue Cross," said one voice. "Oh no!" said the other, "I told you this would happen." "Play for time," said another voice. Outside, the Wabbit was humming Jailhouse Rock and stomping his feet impatiently. "I require to inspect sanitary conditions, food rations and recreational facilities," he barked at the door. "At once!" The figure's head popped out again. "It's inconvenient," he said. "Come back tomorrow." The Wabbit struck the door with his paw. "I'll inform the International Secretariat of your refusal, forthwith." "What's your name?" asked the figure. "Commander Hans Blix," said the Wabbit. The head disappeared again. From inside, the Wabbit heard raised voices and an altercation that lasted some time. Finally, the head appeared once more. "You'd better come in, Sir."
at May 08, 2013