11. The Wabbit gets there in Time 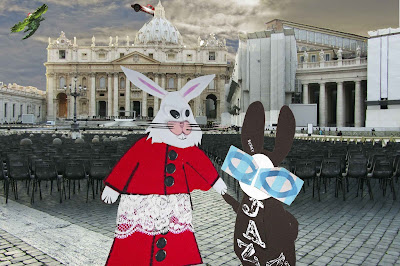 St  Peter's Square was resplendent with loudspeakers and chairs and the Wabbit looked around. "Looks like we got here just in time for you to give your promotion address," he said. Cardinal Lapin grinned. "Just as well," he said, "this wouldn't be a good one to miss." "What happens to Cardinals when they're promoted?" asked the Wabbit, "more pay?" "Lots of paperwork," said the Cardinal, "but luckily I'll have a private secretary." "I'd like a private secretary," said the Wabbit, thinking of his many lists of things to do. "Wabs, perhaps you should delegate more," said Lapin. "Perhaps I should," replied the Wabbit and tried to think of someone do the job. Then he shook his head because he couldn't think of anyone who would take it. Cardinal Lapin took the Wabbit's paw and smiled. "Perhaps I could slip away occasionally and join your merry band on an adventure." "Your very welcome any time," laughed the Wabbit, "but something's been puzzling me." "Go on," said Cardinal Lapin. "Look Cardy," sighed the Wabbit, "when you were kidnapped by the shadows, why didn't you ask the Almighty to rescue you?"  "Oh I did - and he answered," said the Cardinal. The Wabbit stared at him and Lapin squeezed his paw. "He sent you and a Dragon and a Jet Car."
at May 16, 2013