4. The Wabbit, Tony and the Shadows 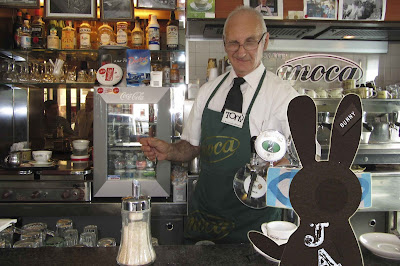 The Wabbit decided on his first port of call. "Start with where you know," muttered the Wabbit, anticipating a first rate coffee. "Commander Wabbit! sad Tony. "On vacation?" The Wabbit shook his head. "Kind of," he grinned. "I'm unofficially searching for an old friend." "Cardinal Lapin?" asked Tony. The Wabbit tried not to look surprised. but the Wabbit knew one thing. He knew that Tony knew almost everything that went on near St Peter's Square. "The last time the Cardinal was here, he showed me several tricks," said Tony with a smile. "I'm afraid he can't be found," said the Wabbit. Tony frowned and bent towards the Wabbit. "There are reports of strange shadows." The Wabbit raised his eyes. "Shadows that shouldn't be there," added Tony. "Shadows in the wrong place?" mused the Wabbit. Tony nodded. "And shadows on dark moonless nights. A customer saw the Cardinal going home one such evening. The street lights went out - and suddenly he was enveloped in shadows." "What happened?" said the Wabbit gravely. Tony looked unusually serious. "When the shadows moved, and the lights came back, the Cardinal had vanished." "But every shadow belongs to some thing, some object," said the Wabbit. "Not these ones," said Tony. "I need a coffee," said the Wabbit.
at May 06, 2013