9. The Wabbit and the Big Plunge 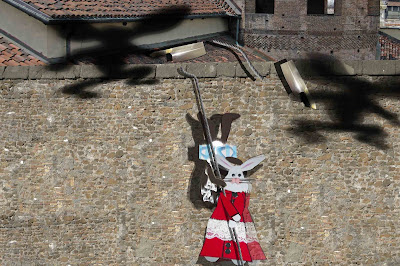 The Wabbit and Cardinal Lapin slid down the rope at speed - but not quickly enough. Sinister shuffling gave way to sinister rushing as two shadows appeared and made for the rope. "They’ve got cleavers!" shouted the Cardinal, "and they’ve got cleaving in mind!" "It’s good stout rope. I got it in a ship chandler's store in Civitavecchia," shouted the Wabbit. But the cleavers were razor sharp and they cut halfway through the Wabbit’s rope. He felt it give slightly, so he stuck his paws on the wall and slid. That slowed them down but still they fell. "How high is the wall?" asked Lapin. "Standard prison issue wall," said the Wabbit. "Too high to look over!" "Where do shadows get cleavers?” muttered the Cardinal but there was no time for speculation. A sickening snick from above severed the rope completely and the Wabbit and Cardinal Lapin plunged helplessly down the sheer face of the prison wall. Cardinal Lapin looked up at the Wabbit as they plunged. "Perhaps I should say a prayer," he said. "Oh, I think I can do better than that," said the Wabbit and he put his paw to his mouth and made a piercing whistle. "What was that for?" said Cardinal Lapin. "Taxi!" yelled the Wabbit.
at May 14, 2013