10. The Wabbit and the Flying Taxis 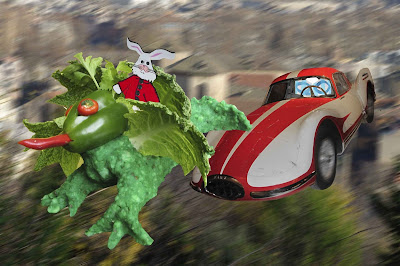 Suddenly there was swooping. In an instant, both the Wabbit and Cardinal Lapin found themselves plucked from the falling rope and borne high over the prison. Cardinal Lapin's ears fluttered in the wind and he clutched Terni the Dragon's leafy wings. "Didn't I see you somewhere?" he shouted. "Not me," said Terni, "I was just passing." "I've never met an actual dragon before," yelled the Cardinal. "Oh, how splendid," said Terni with relief. "Shall I take you home?" "What time is it?" asked Lapin. "It's usually later than we think," said Terni. "Well, I have rather important business to attend to," said the Cardinal, "and with all that kidnapping, I quite forgot." "I'll ask the Commander," said Terni. Cardinal Lapin looked across at Turbina the Jet Car. He heard a radio crackle and Terni speak. "Can you get more speed Commander? We have important business." "Right away!" said the Wabbit as Turbina shot past Terni to lead the way. "What about the shadows?" he murmured. Turbina laughed. "'Tis nothing but a magic shadow show, play'd in a box who's candle is the sun." The Wabbit laughed too. "Round which we phantom figures come and go?" He pushed Turbina's thrust lever and a supersonic bang rattled every window in the city.
at May 15, 2013