7. The Wabbit and the Speed Trials 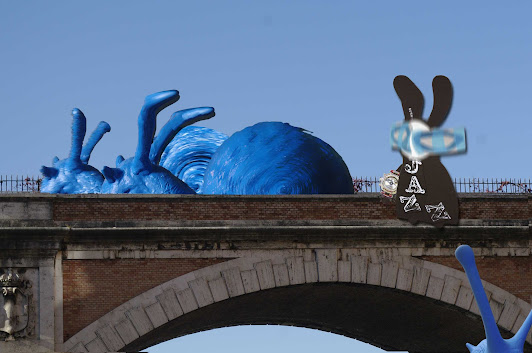 The Wabbit and friends crept out on a crisp, cold morning and scaled the heights of an old disused railway track that crossed the neighbourhood. Then the Wabbit produced a salvaged stop watch from his fur and set it to zero. "Start when I say go," said the Wabbit. But Mo and To had already gone. The Wabbit strained his eyes and he spotted a blue blur in the distance, getting steadily bigger. They were already on their way back! "Wow," thought the Wabbit to himself. "How fast were we?" breathed the Snails. "No-one knows," said the Wabbit, "because you left before I set my stop watch." "It felt fast," said To. "It was super fast!" said Mo. "It's unrecorded and doesn't count," said the Wabbit. Mo and To were properly crestfallen and the Wabbit took pity. "Think you can do it again?" smiled the Wabbit. Mo was already leaving but To quickly grabbed him back. "There will be a penalty for a false start," said the Wabbit. "What kind of a penalty?" asked Mo. The Wabbit hadn't really thought of a penalty but now he felt obliged to name one. So he thought and thought. "You have to go round again and it's added to your time," he said finally. "OK get ready, counting you down to zero," said the Wabbit. Both Mo and To gazed steadily at him.  "Zero," he said. There was an enormous rush of air and a loud crack as Mo and To left and arrived back.  "How were we?" said Mo and To. The Wabbit shook his stop watch free of broken glass. "You owe me a replacement," he grinned.
at February 28, 2012