7. The Wabbit and the old Ghoul 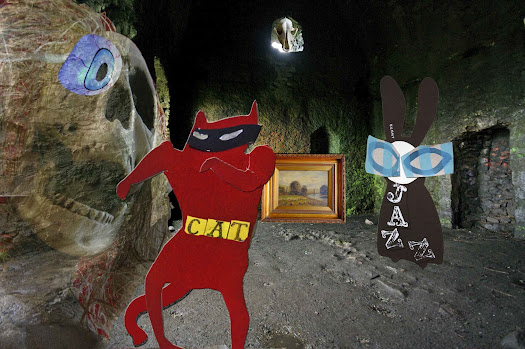 The pair bounded upstairs and into the large room. "Waaaah!" said an apparition which seemed to emerge from the very walls of the Hellfire Club. "Put up your dukes, you feckless fiend!" shouted Skratch, bunching his paws into fists. "Let's see what you're made of!" "He's not made of anything," said the Wabbit, "he's a hologram." Skratch let fly and hit the ghoul on the chin with a hay maker punch, but his paw passed right through the bones. "We meet again my furry friends," said the Ghoul in a jocular voice. Skratch looked at the Wabbit quizzically. "Oh, really. Don't encourage it, let's just take the painting," said the Wabbit. "You may have the painting, It's you we want, Commander Wabbit," said the Ghoul. "Ignore him, he's only a recording, Skratch. Lend me a paw here," said the Wabbit. "this painting is quite heavy." "Are you sure it's a recording?" said Skratch. The Wabbit heaved a sigh, hopped across and addressed the Ghoul directly. "You look like a rummage sale," said the Wabbit and he made a rude sign with his paw. "I prefer boutique," said the Ghoul. "Aaaaagh!" shouted Skratch and the Wabbit as they dived on the painting. They staggered under its weight but dragged it to the top of the stairs at lightning speed. "Do you see what I see?" said Skratch. Six ghastly Ghouls drifted up the stairwell with the Euls crowding close behind.
at February 14, 2012