2. The Wabbit and the Alternative Snails 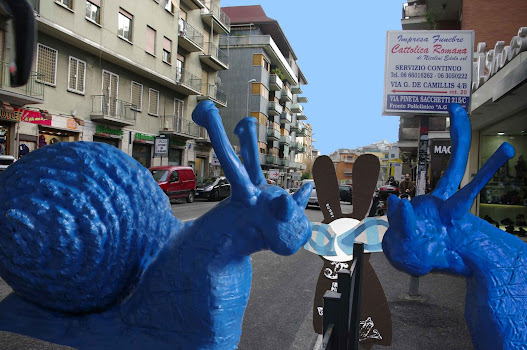 The Wabbit hopped along the street until he caught up with two large blue Snails. "Hey you two," he shouted. "You're not the original Big Blue Snail!" The Snails turned and tried to menace the Wabbit, but the Wabbit was not to be menaced. "Now look you Snails," said the Wabbit. "You'd better explain what's going on. Or there'll be trouble." "Um, OK," said one Snail. "We are the advance guard of the Alternative Snail Army." "The New Model Snail Army," said the other. "What do you stand for?" asked the Wabbit. "We're not exactly sure," said the first Snail. "But we're against things," said the second. The Wabbit shook his head. "You Snails have to be clear," he said "or no-one will know what you want." "We're against oppression and we want Snail freedom," said the first Snail. "It's a bit general," said the Wabbit. "We want Snail Rights," said the second Snail. "What are these rights?" asked the Wabbit gently. "The right to be left alone and supplied with plenty of leaves, fruit and cardboard," said the first Snail. "Seems reasonable," said the Wabbit, "so let's start. I'll shout a question and you respond." "OK," said the Snails. The Wabbit hunched his shoulders and put his head back. "What do we want?" he bellowed. "Rights for Snails!" they yelled back. "When do we want them?" yelled the Wabbit. "In due course!" shouted the Snails. The Wabbit slapped a paw to his head. "You Snails need training," he muttered.
at February 22, 2012