The Wabbit and the Art Adventure Caffè 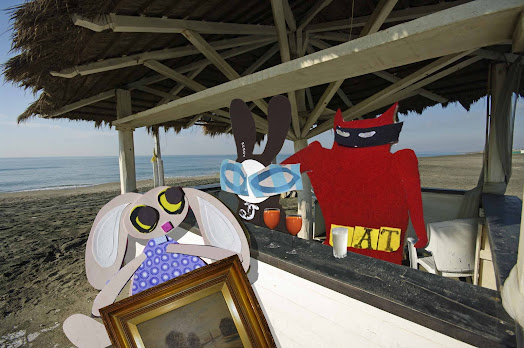 The beach at Fregene was deserted except for the Wabbit and Skratch and Lapinette. Lapinette smiled as she took delivery of the painting and her ears twitched in delight. "A job well done," she said. "Oh yes of course," said the Wabbit. "Just our usual. And is everyone having the usual?" Skratch’s tail quivered with anticipation. "The painting, the painting, what about this sought after painting?" he shouted. The Wabbit poured a glass of hot milk for Skratch and looked at Lapinette. "Skratch wants to know what’s so special about the painting," he said. "The painting," said Lapinette, "is the first in a series called Wabbitlands." "Very nice of its type," said Skratch. "But Skratch wants to know ..." said the Wabbit.  "... what’s so special?" smiled Lapinette. "About the painting!" yelled Skratch. Lapinette giggled. "Hidden behind the painting is a map of all the locations of our enemies, the despicable Agents of Rabit," she said with satisfaction. Skratch leaned forward sharply. "We could have taken the map from the back of the painting," he said. "That would have given the game away," said Lapinette, "because the Euls didn’t know it was there." "And besides," said the Wabbit, "it's a nice picture." "In an extremely heavy frame," said Skratch. "You were a work of art, carrying a work of art," said the Wabbit. Skratch smiled a big smile. "My art belongs to Dada," he purred.
at February 20, 2012