1. The Wabbit at Loose End 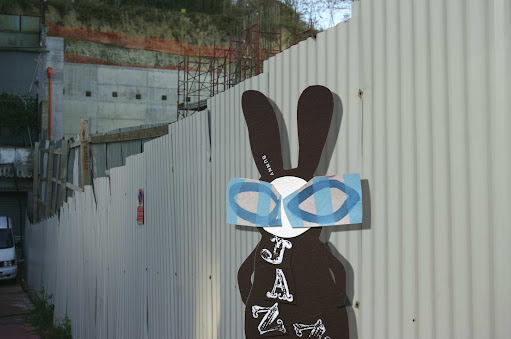 The Wabbit hopped all around the city and eventually admitted that he was at a loose end. He looked about and all he could see was concrete. "I'm going to call this place Loose End," thought the Wabbit and he dug his paws deep into his fur. A warm south wind blew through the cold air. It was a very strange wind that carried a red grit that got in the Wabbit's eyes and made them sting. The Wabbit was unsettled. "Sometimes the city seems friendly and sometimes it doesn't," he thought. But this was a time when the city seemed indifferent, and above all other things, the Wabbit hated indifference. "I need something to do," thought the Wabbit. But the Wabbit reasoned that if he consulted his to-do list, he would find he had so many duties to perform. So he burrowed his paws further into his fur and resolved not to think about lists. "I need  a success," thought the Wabbit. "Maybe even a great triumph," he thoughtfully added. And he scuffed the street with his feet and leaned back against the iron fence. But the Wabbit knew one thing. He knew that little came from leaning against iron fences. So he squinted his eyes and he stared and he thought until his brain raced. And as he looked at the traffic passing routinely along the street he noticed something odd. "Now what the binky is that?" thought the Wabbit.
at February 21, 2012