The Wabbit and the Last Submarine Home 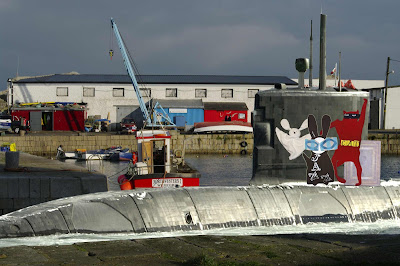 Up on the Hillside not so far away, the ghouls and the ghosts and the Euls gathered themselves together and  grumbled about the loss of the painting, whilst safe and sound in Dalkey Harbour, the friends caught the last submarine home. They had been waiting patiently at the dockside when it suddenly surfaced, much to the surprise of the fishermen who normally used the small port. "Coming with us Ghost Bunny?" asked the Wabbit affectionately. "I always wanted to sail in a submarine," said Ghost Bunny. "I heard that we're going to Abu Dhabi!" "Always!" said the Wabbit and he grinned a big grin. The Wabbit turned to Skratch and shook him by the paw. "Thank you Skratch, you showed commendable enterprise." "It was most enjoyable and I wouldn't have missed it for a cat's ransom," said Skratch, "but what’s so special about the painting?" "That’s a very long story for later," said the Wabbit. "The most important thing is that we have it and the Euls don’t have it and if we have what they don’t have, and they know we have it, it’s better all round." The Wabbit tended to make Skratch’s head spin with this kind of talk, but this time Skratch just laughed and laughed.  "So what are we going to do now, Commander?" he asked. "Run Silent, Run Deep!" smiled the Wabbit.
at February 17, 2012