8. The Wabbit at the Zero Caffè 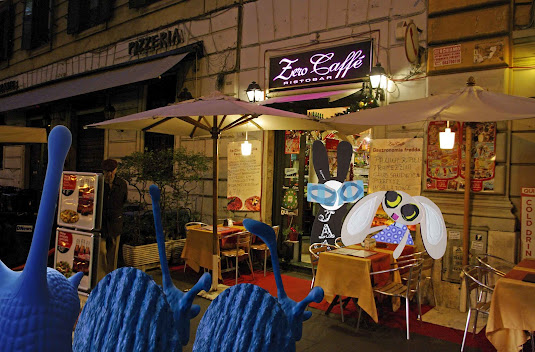 Lapinette was studying something very intently when the Wabbit arrived with his protégés in tow. "I present Mo and To, the MoTo Snails," said the Wabbit with pride. Lapinette assessed the Snails for quite some time. "How fast?" she asked eventually. "Oh around Mach 2," said the Wabbit in a matter-of-fact manner that suggested Mach 2 was routine for a snail.  "Wabbit!" shouted Lapinette. "Have you and Big Blue Snail been working in that shed again?" "We hired a garage," said the Wabbit innocently. Lapinette looked sternly at the Wabbit and then turned to the Snails. "Mo and To, are you quite happy with this turn of events?" she enquired softly. "Delighted," said Mo. "Critically delighted," said To. While Mo and To were wiggling their antennae in delight, the Wabbit seized the opportunity to ask what Lapinette was studying. "The Map," said Lapinette. "What map?" asked  To. "The locations of our wicked and vengeful enemies, the agents of Rabit," said Lapinette. To and Mo looked questioningly. "They would make sausages of us all," explained Lapinette.  "We’re against them!" shouted Mo. "Let's get 'em!" yelled To. "Now!" they cried in unison. Big Blue Snail shook his head. "I fear their youthful enthusiasm requires tempering by a mature and wise mind," he said. There was a thud as Lapinette slapped her menu on the table. "Well, I hope you’re not thinking of the Wabbit," she said.
at March 01, 2012