The Wabbit and the Delayed Ghost 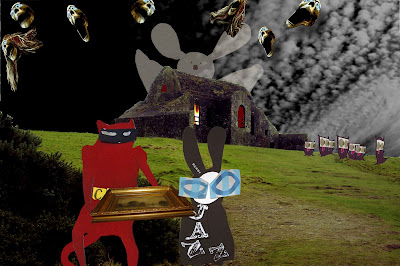 Skratch and the Wabbit powered down the slope with the painting but they heard nothing behind them so they both stopped and turned. "I was expecting more chasing and chanting" said the Wabbit. "I can’t see a thing," said Skratch. They both stared at the old haunted Hellfire Club and rubbed their eyes until they were sore. "Strange," said the Wabbit. “Curious,” said Skratch. "Well, I’ll just put this heavy painting down," said the Wabbit, "it’s making my shoulder ache." "Maybe we should go while the going is good," said Skratch cautiously. Suddenly they heard a terrible shriek and they ducked as Ghouls flew in all directions. They saw Euls flee from the house and tumble down the incline one after the other. Then, after what seemed like an age, an enormous white shape rose slowly and somewhat elegantly from behind the ancient stone walls. It dwarfed the rooftops and as it spread its ghostly wings, it issued a chilling scream that carved the air. It wailed and wailed until the brickwork trembled and tree branches bent backwards in the rush of air that followed the dreadful sound. "Disturbing," said the Wabbit and he clapped his paws. "And perturbing," said Skratch and he flicked his tail.  "What took you so long, Ghost Bunny?" said the Wabbit. “Paperwork,” howled Ghost Bunny.
at February 16, 2012