5. The Wabbit and the MoTo Snails 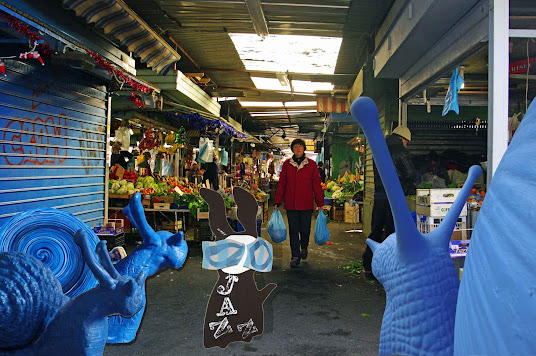 Next in the new Snails' education, was the market. "This is where snails assist in global recycling," said Big Blue Snail. "Look how blue the market has become," observed the Wabbit. "Here comes a blue snack now," said Big Blue Snail, "the traders are only too happy for us to eat their cardboard." "Perfect," said the first Snail in delight. "I'll wait and see how it goes," said the second suspiciously. The Wabbit smiled. "You require new names," he said. "I can't keep saying "You Snails" - it's rude." The new Snails pondered. "What makes you different from other snails?" asked Big Blue Snail. "We're fast Snails," they replied. "We're from Misano, near Rimini." said the first Snail. "We race the circuit there," said the second. "What's your best lap time?" asked the Wabbit, winking discreetly at Big Blue Snail. "One point three three," said the first Snail. The Wabbit's eyes widened and his ears began to quiver. "Minutes?" he asked. "Hours," said the second Snail. The Wabbit tried to keep a straight face. "Oh, that's respectably rapid, my good Wabbit," cautioned Big Blue Snail in an admonishing tone. "Then our new Snails are now Mo and To!" said the Wabbit swiftly, "they're the MoTo Snails!" The Snails wiggled their antennae joyfully. "Do your shells revolve by any chance?" asked the Wabbit shrewdly, pointing to their racy whirls. "We spin them for speed," they said together. The Wabbit turned to Big Blue Snail in excitement. "To the workshop!" he said.
at February 26, 2012