4. The Wabbit and the Inquisition 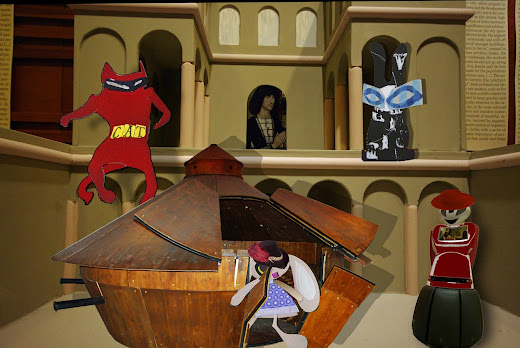 [The scene is Leonardo's Cat's house where he is displaying his tank-like military invention to his new friends. Suddenly from stage left, Robot's electronic voice booms out.] "I am the Inquisition. You will be exterminated!" "Excommunicated," hissed the Wabbit. "You will be excommunicated," said Robot, "for sorcery." "But he is no sorcerer," said the Wabbit. "He is but a friendly fool who knows not his own mind yet plays with it as a cat plays with a ball of wool." "He has built a magic house the like of which has not been seen," said Robot, "and we will have none of it." Just at that very moment, Lapinette emerged from Leonardo's Cat's tank. "Oh what a splendid place to meeteth and greeteth," said Lapinette. "I will inform my master so and he will order three score. "And who is your master, youthful page?" asked Robot. "Lodovico Sforza," said Lapinette. "The Duke of Milan," said the Wabbit. "We play skittles together then indulge in a game of primero with biscottini thereafter." "And that is what this tank is for," said Lapinette. "It's for knocking down skittles from afar." "Though this be madness yet there's method in't" said Robot but he was interrupted by a yowling from above. "O, what a rogue and peasant slave am I," meaowed Leonardo's Cat, "see how the Cat doth caper." And with that he screeched and frantically waved his paws. "What a caterwauling do you keep here?" asked Robot. "Now there's a cat that really is gone," said the Wabbit.
at February 01, 2012