1. The Wabbit goes to Sea 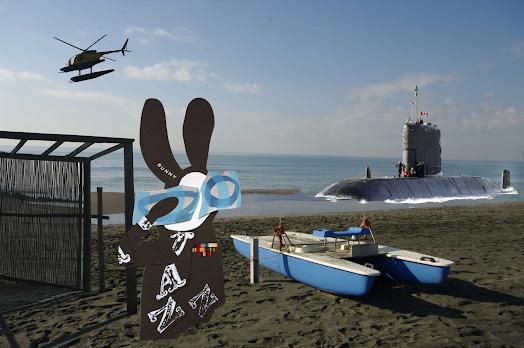 It was cold on the beach despite the sun and blue sky. The Wabbit shivered and listened to the chatter of Lapinette's helichopper engines fade. Before long he could hear the muffled sound of another set of engines and a submarine suddenly surfaced in what the Wabbit thought had been shallow waters. As usual, the Wabbit had only the barest of clues about his new mission. "You'll be briefed on the journey," Lapinette had told him. The Wabbit thought that was all very well, but he knew the journey would have been more comfortable by car. He barely tolerated submarines, because he couldn't look out from the bridge and shout instructions into a telephone. But the journey was to be conducted under the heaviest secrecy and no shouting was allowed. He would have to put up with it. So the Wabbit hopped into his small boat and made his way out. "Permission to board," called the Wabbit, saluting the ensign. "Come aboard Sir," said the Captain. Where submarines were concerned, the Wabbit always worried that things might break off, so he dealt with that first. "Angles and dangles, when you're ready," he chirped. "They don't like such manoeuvres in these waters, Sir," said the Captain. "They'll never know," said the Wabbit, "Crash dive when there's room." "Trim party," shouted the Captain to the crew. "Party already? Mine's an aperitivo," said the Wabbit.
at February 07, 2012