The Wabbit and the Path of the Puma 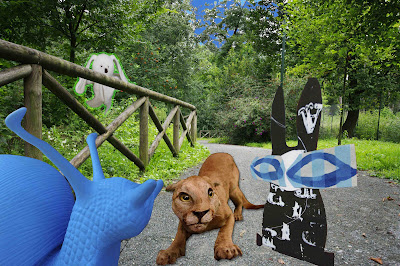 The Snail had decided to live at the old abandoned hospital and so all together, they made their way by the forest path. But as they rounded a corner, they found their way blocked by a most ferocious creature. There was no way past and the Wabbit hopped forward. "Good evening Mr Puma," he said in a commanding tone. "Oh really, is there anyone you don't know?" asked the Snail. "How is Skratch?" said the puma. "Around and about," said the Wabbit in a non-commital fashion. "I thought you were safely relocated." "Grrr," said the puma. "Don't talk me about the Forestry Police. They caged me and did things with tags. And the food was horrid. I escaped at the first opportunity." "Frighten, frighten, frighten," called Ghost Bunny from behind the fence. "Oh Hello," said the puma and he lifted a weary, mud stained paw. "Snail," said the Snail, "Big Blue," he added. "Pleased to meet you," said the puma. The Wabbit was going to ask if the puma was hungry but he thought better of it. "What are your plans, Puma?" "Prowl the territory, know the territory. It is the Path of the Puma." said the Puma. "And then?" prompted the Wabbit. "I will be the territory," said the Puma with such a solemn expression that the three friends wanted to laugh and laugh and laugh. But they wisely decided against.