5. The Wabbit goes in the Front 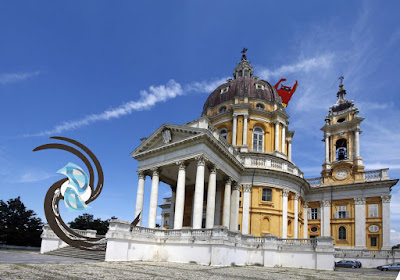 Wabbit didn't even think about how he was going to get in. But he knew one thing. He knew he had the element of surprise if and only if he cartwheeled. He hadn't cartwheeled in some considerable time, but his recorded speeds were exceptonal. So the Wabbit assumed the position and then, with one mighty bound, he whirled across the courtyard and up the steps of the old basilica. "It is funny," thought the Wabbit as he cartwheeeled, "that one's brain functions well in cartwheel mode." The Wabbit thought a lot of strange things in moments of pressure. "They will certainly see something coming, but they may not know it's me. And even if they do know it's me, they won't know what do," he thought. With the aid of his Marchionne brakes, the Wabbit came to a dead stop in front of the ancient door and looked about. There was dead silence and nothing moved. But he could feel many pairs of eyes watching him through the still air and the eyes were watchful and sinister and their stares prickled his fur. He kicked the door with his hind leg and the door groaned in protest. "Open up forthwith in the name of the Department of Wabbit Affairs," he shouted and kicked the door again for good measure. Answer came there none, which the Wabbit thought was scarcely odd. On his right he spotted an open window and a winding staircase. "I'll take the scenic route," thought the Wabbit.
at August 13, 2011