6. The Wabbit retrieves the Ancient Box 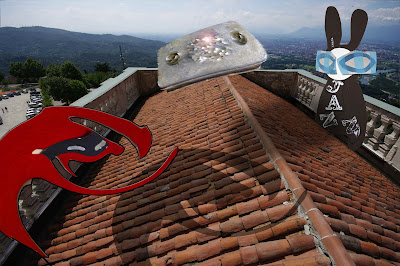 Hoping that Skratch had done his job, the Wabbit loped quickly up the winding staircase and hopped onto the roof. "Catch," shouted Skratch. The Wabbit gasped as the box came spiraling across the rooftop. He clasped it to his chest in the manner of a goalkeeper and made a small "oof" as he shoved it deep into his fur, He coud hear Skratch calling as he skittered across the tiles. "They're coming and they don't look pleased!" yelled Skratch and he disappeared over the edge of the parapet. "No time," thought the Wabbit to himself, "I must be on my way." He bounded across the roof, but when he got to the staircase door, he took one look over his shoulder. They seemed to appear from nowhere. Their eyes bulged and their teeth grimaced and they moved at the speed of light. "Give us back our box, Wabbit" they wailed in unison. "Give us back our box or we will take it from you." "And we will take you as well," howled the leader of the ghastly band. His voice changed to a gargling rasp. "For fun and profit!" "The Wabbit had no time for smart dialogue such as this. He began to descend a staircase that trembled with every piercing shriek.
at August 14, 2011