11. The Wabbit opens The Box 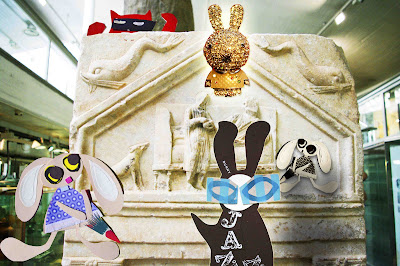 The Wabbit, Lapinette and Skratch assembled at the Museum of Antiquities and the Wabbit produced two ancient keys from his fur. Lapinette held the box and the Wabbit turned the first key once to the right, then the second key twice to the left. With a faint creak, the lid twirled twice to the right, once to the left and then folded neatly back. From his perch, Skratch could see a golden glow spread across the Wabbit's face, then Lapinette's. Suddenly, he started to tremble as he saw an object rise from the box. It was so bright that they all wanted to look away but they couldn't turn their eyes aside as a fabulous bejeweled Wabbit began to take shape. It became bigger and bigger, shining like the sun - then suddenly with a click, it settled back into the stonework. And for all the world, it looked as if it had always been there. The Wabbit spoke. "This is the Ancient Bejeweled Wabbit. It is said that it came from Wablantis, but no-one knows for sure. We do know it was stolen by the accursed Agents of Rabit." "Worth a bit," said Skratch who had recovered. "Here it shall safely remain," said the Wabbit firmly and grinned. "Doesn't that look a bit like you?" said Skratch to Lapinette, "over there on the frieze." "Whatever gave you that idea?" Lapinette retorted. "What would have happened if the keys were turned the wrong way?" asked Skratch. "Kaboom!" said the Wabbit.
at August 20, 2011