The Wabbit makes an Introduction 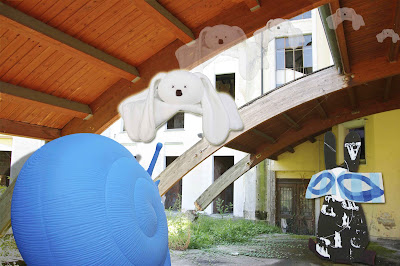 "Another hospital?" queried the Snail. "This is my most favouritist abandoned hospital," enthused the Wabbit. "I wanted to introduce you to my learn-ed associate!" There was a low moaning from the corner of the roof and the Snail ducked quickly as an apparition swooped over his antennae. The apparition executed several tight turns and yelled "Frighten, frighten frighten!" "She's coming back for second swoop," gurgled the Snail and ducked again. "Be not afraid," said the Wabbit. "I wasn't really," confessed the Snail. The apparition hovered just above the Wabbit''s shoulder, fluttering occasionally. "Ghost Bunny's the name. Haunting's the game!" said Ghost Bunny. "Excellent swooping," said the Snail. Ghost Bunny whispered in the Wabbit's ear, which was quite easy. "I like your friend," she said in a soft, breathess tone. "You're not from round here," interrupted the Snail. "I'm from Pluto," said Ghost Bunny proudly. "Not many of you Plutonians in this city," said the Snail and winked with the eye at the end of his longer antenna. "Just one," said the Wabbit, taking control of the conversation. "Ghost Bunny has a doctorate in Quantum ... thingies." "Will you take a slide with me?" asked the Snail. ""Yes but I'd rather frighteningly hover," murmured Ghost Bunny. "I will hop!" said the Wabbit sharply