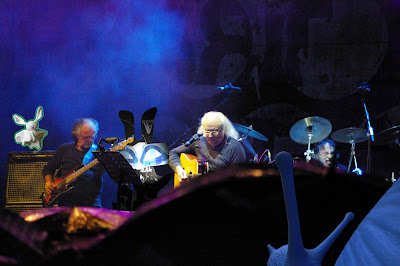 "Oh, it's raining!" said the Snail. "The show must go on," said the Wabbit. "I rather like the rain," said the Snail." "I do not, it sullies my fur," said the Wabbit and stared over the umbrellas. "My goodness, look who it is," gasped the Wabbit, "come on!" The Wabbit leapt to the front and with a single bound he was on the stage. "Patrick, Franco, Franz!" greeted the Wabbit and his voice boomed through the speakers. There was a murmur in the crowd and it became increasingly louder. "Wabbit, Wabbit! We want the Wabbit!" shouted the crowd. "With this rain we haven't got long." said Patrick, "so take it away Wabbit," " What with I wonder," thought the Wabbit." "Any requests?" he shouted, tapping the microphone. "Photos of Ghosts!" murmured Ghost Bunny. The Wabbit glanced at Ghost Bunny and grinned. "Photos of Ghosts, Photos of Ghosts!" yelled the crowd. A melodic introduction began. "Black roses laced with silver, By a broken moon, Ten million stars, And the whispered harmonies of leaves," sang the Wabbit. The crowd roared and drowned out his voice so he sang louder, ""Five dusty tomes, with faded pasted pictures, of love's reverie, across each cover is written, "Herein are Photos of Ghosts". The Wabbit paused for the attention of his audience - then when he had it, he lowered his voice and sang softly. "... of ghosts, of ghosts, of ghosts, of ghosts ..." His words echoed and bounced across the wet square and the streaming rooftops and all the umbrellas of all the people. Suddenly a thunderous crack shook the buildings. Lightning filled the air and poked its way into every crevice as the rain poured down in torrents.