8. Lapinette to the Rescue! 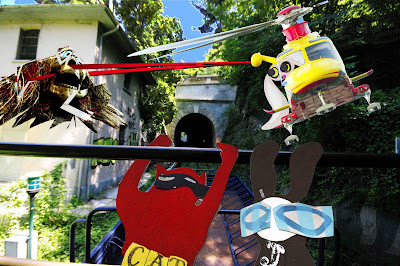 "This is not a fast train!" shouted the Wabbit. "Faster than us, especially without the brakes," yelled Skratch. The train picked up speed on the incline and rattled through the tunnel with the chief ghoul in close pursuit. They hardly dared to turn around. They could feel his dank breath and shrill cries and they willed the small train to go faster because he was gaining ground. Suddenly, the train shot out of the tunnel and into the light. "I can hear something weird," shouted Skratch. "I know that sound. it's an Agusta-Bell AB 412," said the Wabbit with excitement. Skratch looked at the Wabbit with horror. "I'm open to correction," grinned the Wabbit. "Duck!" shouted Skratch. Lasers seared the air above their heads as Lapinette fired twice at the ghoul. The ghoul screamed and screamed and his voice was like a rasping saw. "Yah boo. Who you?" he sneered. Lapinette's eyes briefly met his as she calmly resighted and with the press of a button her lasers split his ghastly head asunder. Shattered pieces of skull rolled down the hillside, leaving only smoke and a lingering acrid smell. "You don't see that every day," said Skratch and waved at Lapinette. The Wabbit dug Skratch hard in the ribs. "Just one thing," he said. "Ouch, what's that?" said Skratch. "About the brakes on the train?" asked the Wabbit.
at August 16, 2011