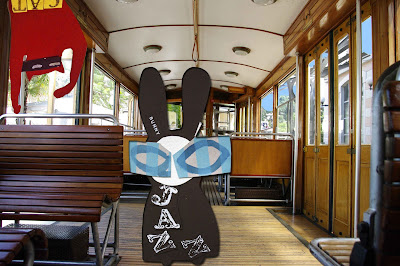 Like any normal tourists, the Wabbit and Skratch took the funicular railway to the top of the mountain. Skratch, however, preferred to travel on the roof. "I can see more," he told the Wabbit, "and I can always jump off in the case of an emergency." "Are you expecting an emergency?" asked the Wabbit. "Not really," said Skratch and disappeared. The Wabbit looked all round. It was a quiet day and passengers were few. The Wabbit fretted. He would have preferred the cover of a mixed group of travellers and he looked out of the window. In the distance he could see the approach of several foreign visitors, three mothers with babies in buggies, a man with a suitcase and a punk rocker wearing a studded collar. "Perfect, no-one will ever notice me," thought the Wabbit and settled unobtrusively into his bench. He could hear Skratch stretching on the metal roof and he hoped that no-one else could. The guard closed the doors officiously, the driver pulled a lever and the train lurched forward. The way was steep and suddenly the train seemed to climb vertically. A passenger became very flustered. "On funiculars, I worry the whole way that the train will crash down the mountainside," he moaned. There was a resounding snort and guffaws from Skratch on the roof. "What was that?" said a child. "Mice," said the Wabbit.
at August 06, 2011