7. The Wabbit gets chased by Ghouls 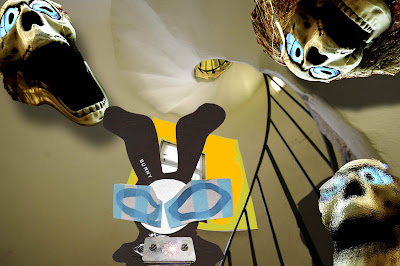 Holding fiercely onto the ancient box, the Wabbit hopped down the staircase as quick as he could possibly hop. Going down seemed much further than going up and the Wabbit was anxious not to miss a pawhold on the worn steps. The ghouls shrieked and moaned and made the most awful din - and as they did, they cursed the Wabbit. They yelled that they would chisel his name on a tombstone and then argued about the spelling. They screamed they would drag him to hell but it was full. But most of all they shouted that he was a scared wabbit and that he should run and this annoyed the Wabbit so much that he vowed that they would shortly meet their doom. And for every step he crashed down, he named a ghoul and mentally placed it on a list. Then he vowed to cross them all off his list one by one and he bared his 28 teeth in a menacing smile. He clung to the box and closed his ears to their taunts. He could see the ground floor and the door from the basilica to the outside world loomed large. He made one long final leap and zig zagged across the courtyard in sudden, rapid darts that sent gravel flying. Startled birds flew up with a terrible flapping of wings but the Wabbit heard a voice above the noise. "Over here Wabbit," shouted Skratch.
at August 15, 2011