9. The Wabbit Hits the Brakes! 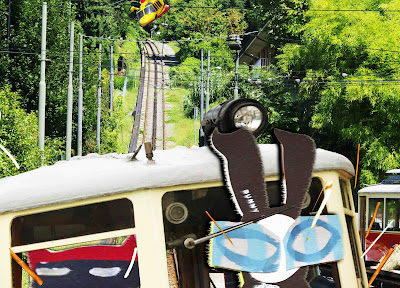 "Brake!" shouted Skratch as the train sped faster and faster. "Hit the grippers!" he yelled. The Wabbit looked at the controls. "Lever, switch or button?" whispered the Wabbit through gritted teeth. His paws itched uncontrollably. "Now would be good," muttered Skratch and he crouched down as the the wind tore at his fur. "Tinker, tailor, soldier, spy," said the Wabbit, who seldom used a standard phrase if it could be altered. "Hurry up, we're going to die," screamed Skratch. "That's not how it ends," said the Wabbit. He took one long look at the most interesting lever and hopped back. Then with an astonishing combination of brute force and ignorance he swung his most powerful hind leg and it connected with a sickening thud. Nothing happened and the train continued its plunge. Skratch looked at the Wabbit. The Wabbit looked back, wrinkled his nose and held a paw to his ear. An apologetic "snick," from the lever was followed by an eerie silence. There was a groan, a whine and a crunch and then, with a sudden bang, a shower of sparks erupted from the wheels as the brakes gripped. Skratch and the Wabbit lurched forward and back as the train rolled mildly into the station and came to a halt with a wheeze, one single solitary centimetre from the buffers. "The secret of my success," said the Wabbit, "is never say die."
at August 18, 2011