The Wabbit and the Big Blue Snail 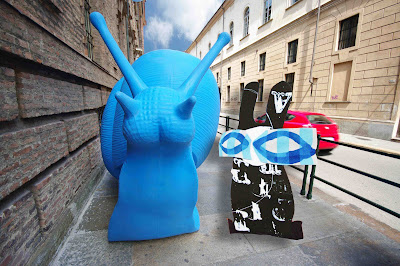 The Wabbit was kicking around with no particular place to go. And he was grumbling to himself that he wasn't having an adventure. Lapinette had been called away on an urgent mission and Skratch was just Skratch and was wandering with intent. "I'm bored, I'm bored, I'm bored," muttered the Wabbit through his 28 teeth. "You're telling me," said a deep voice. The Wabbit looked around sharply because he had become so wrapped in his own complaints that had failed to noticed a Big Blue Snail. "I didn't notice you there," said the Wabbit. "I find that hard to believe," said the Snail. "Don't let me jive you, Daddy-o," said the Wabbit in a curious manner. He hunched his shoulders and thrust his front paws deep in his fur. "I was missing my adventures, that's all," he added apologetically and scuffed the street with a back paw. "I've been queuing here for a fortnight," said the Snail. "What's in there?" asked the Wabbit. "The Museum of Natural History." replied the Snail with a dismissive tone. "Oh," said the Wabbit and then he thought for some time. Finally he spoke. "Look, Mr Snail, we can see more natural history here in the street than in a stuffy building full of stuffed beings." "Perhaps I could slide along with you for a while," said the Snail. "You could do worse," said the Wabbit.